On the bus coming back from the office today at stop what seemed like two dozen students got on. Always talking, always laughing. I now have an iPhone 6+ to go with my Android (thanks to my day job) so I can use the Hipstamatic app again 🙂 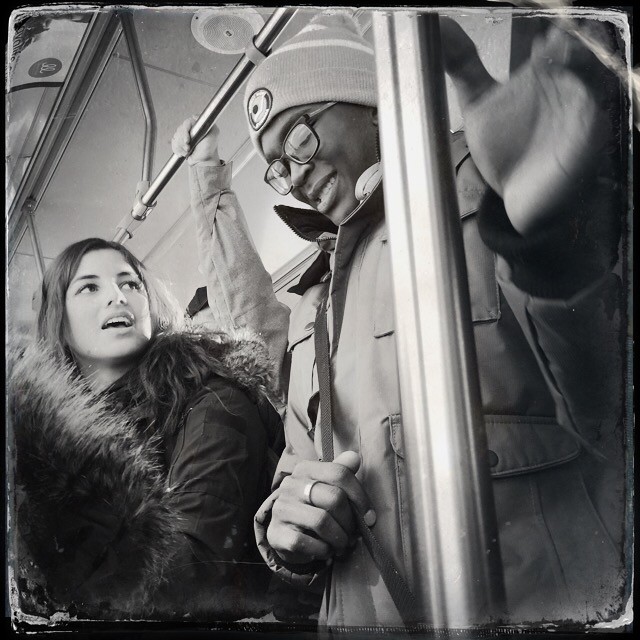 As I write this post, the anger and revulsion is raw from the murders in Paris today. Two images I took on the bus ride home from work today seemed to resonate, and in at least one sense contrast today’s hateful tragedy.
This first image is of someone who was having an animated conversation with (or was talking at) the person sitting opposite him on the bus. I had my headphones on, and listening to music too loud as normal, so I could not hear what he was saying. 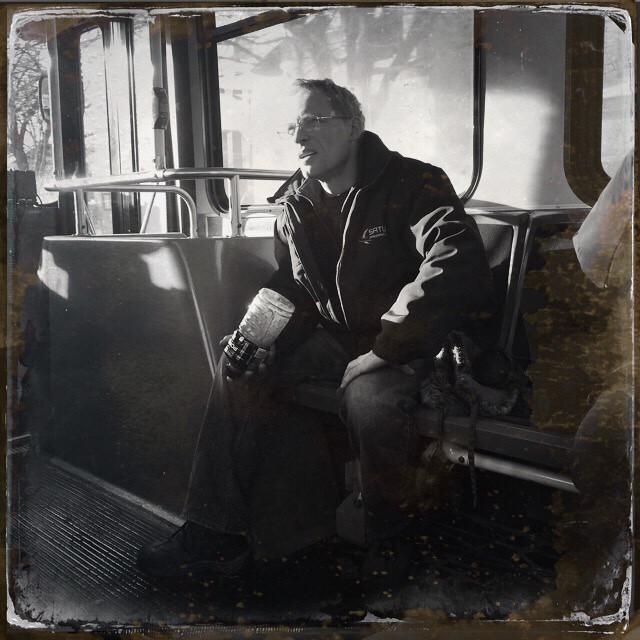 The second picture is of two young women who were sitting nearby in the bus. I noticed the woman speaking to the man, and something made me take of my headphones. She was accusing him of saying something racist, and he was denying it, as he was getting off the bus at his stop. 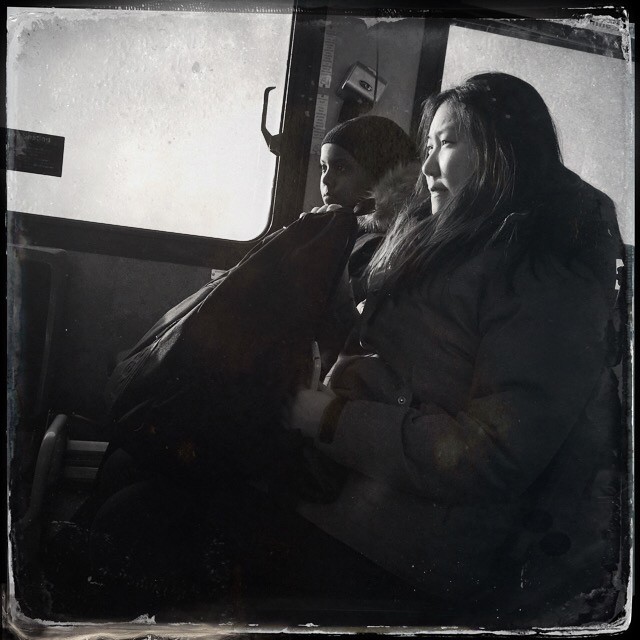 What was interesting was that the young woman made her views know respectfully, and politely. She did not raise her voice or engage in any abusive language. For his part, the main whom she accused, while denying her accusation likewise did not become abusive or threatening. While they could not complete their discussion, it was hard for me not to believe (or at least hope) that they might have been able to eventually reach some kind of understanding. I was especially impressed by the behaviour, actions and bravery of the young woman. Hers is the face of a future where racism and intolerance could be tossed on history’s ash heap.

Today’s image was taken about a week ago; I was at Downsview subway station, waiting to meet someone from whom I was buying some film (and got a great deal on 20 rolls of some medium format Fuji colour negative film!). With me I had my “Baby” Speed Graphic (originally designed to shoot 2 1/4″  x 3 1/4″ sheet film, I was shooting 6 x 7 cm images on 120 roll film, via a film holder from an Mamiya RB 67). It has a 101mm Kodak Ektar lens, which I just love!

Coming home from work the other day, waiting for the bus at Broadview station I noticed this woman. She seemed to be in a different world, standing almost at attention, looking straight ahead, but with her eyes almost completely closed. It was impossible to really get a sense of what was going on.

On the subway to work this morning, the intensity of this man’s expression caught my attention; he spent the whole time whispering to himself under his breath.

I love looking at the people on the TTC (and since I have a one hour plus commute to work each day, I have plenty of time to look!).

Today’s image was taken on Sunday morning on the TTC. It’s been awhile since I have seen so much of the pain and weariness that life holds for some people etched on a person’s face.

Today’s image is an iPhone 4S/Hipstamatic shot of a walkway at Kipling subway station, early in the morning dark. To me it always looks so cold and industrial.

Today’s image is from another bleached/reclaimed Fuij FC-100C instant print, taken at the Broadview subway station in Toronto. I posted it on flickr as I was going out the door this morning, and didn’t have time to add any description. It quickly got a couple of nice comments, but I think one person made the assumption the look was all done in post. Given the plethora of apps and plug-ins available today to make digital images look like grungy lo-fi analog images, it was not an unreasonable assumption; most viewers would have done the same. I just can’t help but notice the irony of the situation.

Toronto is testing some new subway cars, and one of the nice features is that with these new cars the train is open from end to end, so you can walk between cars. From a photographic point of view, seeing right to the end of the train offers some interesting photographic opportunities. I had been wanting to shoot one of the new trains with a super-wide angle, and this past Saturday morning I lucked out. I had my Leica IIIf with me, with the 21mm/f4 Voigtlander Color Skopar lens. I had to shoot wide-open at 1/40 second, but I did get some that were sharp.

I’m having fun working on one project right now, a lo-fi iPhone project capturing the experience of my daily commute to and from work on the TTC (Toronto Transit Commission). I go the work early, and am normally on the subway by about 6:20 a.m. At that time of day, one does not see the rich latte drinkers, or other privileged classes of Toronto that for so many people form their only impression of the city. One sees the working class, an awful lot of diversity, and often, sheer fatigue, which I tried to capture in the photo below, taken with the iPhone 3GS camera, then given a vintage, lo-fi effect which I feel was ideally suited for the mood.