From my steampunk shoot with talented author Rebecca Diem who has just published The Stowaway Debutante, a fun steampunk read. I had the idea for the prop (the world’s oldest camera-phone? 🙂 ) some time ago, and this shoot was the perfect time to use it! 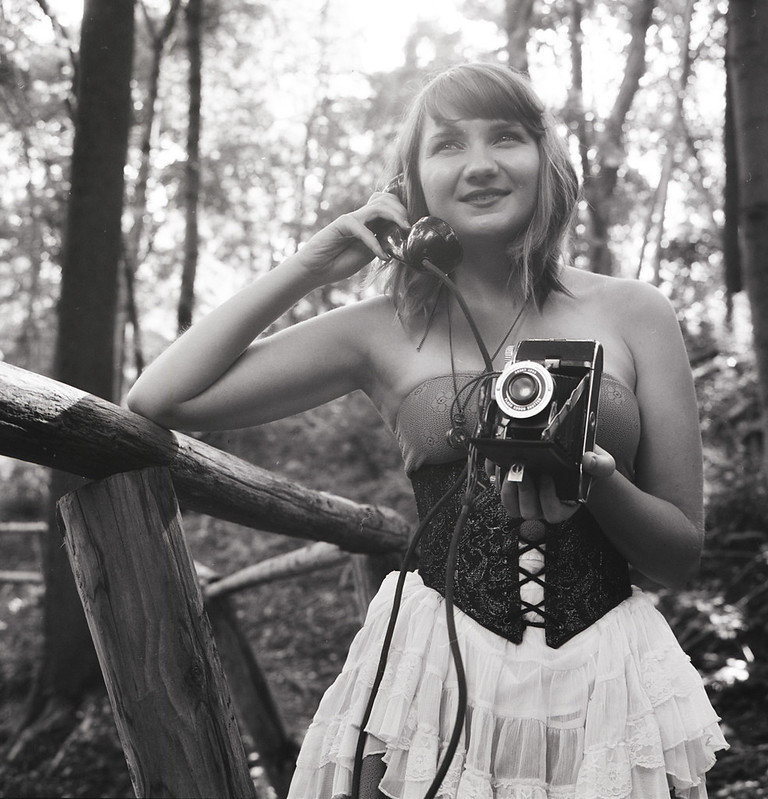 I like sunglasses pictures: sunglasses create mystery, and often end up with interesting reflections. This image was created yesterday at the closed (but not demolished) Eastern Avenue bridge over the Don River near lake Ontario here in Toronto, and I like the bridge reflections in the sunglass lenses. 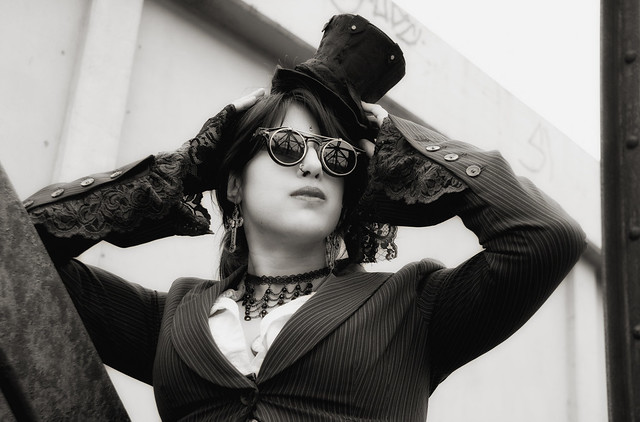 Today, one more image of Jennifer from what I am calling the Jennifer Gears project 🙂 Today’s image is one of the black and white film images I created. In addition of course to  Ashley ‘s amazing technical work, I think it is really important to highlight Jennifer’s contribution today: her intensity and expression were as critical as any other success factor for the shoot! There is always depth and complexity in her expressions, and that makes her a rewarding model to work with.

I think special mention should be made of how patient she was during the multi-hour make-up/FX application, as well as removal afterwards!

I have had the privilege of working with model/musician Jennifer Bettencourt on a number of occasions, so when she contacted me recently about a project I was naturally interested. A friend of hers named Ashley,  who is a new graduate of a program in special effects needed to document her final school project, and needed a model and photographer and I was lucky enough to get the call.

The project was steam punk themed, and involved the creation and application of many. many gears to Jennifer’s skin, and we aren’t talking just make-up; Ashley made the gears using moulds she made herself to create three-dimensional pieces applied like tattoos. Preparation took many hours (see a “behind the scenes” prep shot at the end of this post), but the results were worth it! It was also fascinating to watch the whoe process; I certainly learned a lot!.

Here’s a behind the scenes image

Today’s image stars model Jennifer, who has graced the pages of this blog before. Jennifer reminded me when we did this shoot this past weekend that it had been roughly a year since we started collaborating, and together I think we’ve created some good work. Jennifer brings so much to a shoot in terms of energy and personality that collaboration is the correct way of describing a shoot. Her  spirit shows in every image, and she deserves the credit for that. Today’s image is a good example: a lot of the Steampunk photography I see comes across as rather serious, but with her playful expressions Jennifer was able to turn it upside down, and bring some fun into the photographs!!

Today’s image is turning into one of my favourite portraits of the year. It is another image of Tara in High Park. The direct low sun made for a magical light, and the variety of reflections in the glass sphere seemed endless.

Today’s image is the first of a couple I’ll be posting from a shoot with model Tara on Friday evening. The shoot featured steampunk elements such as the goggles, and in the image below a parasol that I tried to give a brass effect to. In this image, I asked Tara to spin the parasol, while I used a very slow shutter speed. I think it worked 🙂

Today another image of Ren from the Steampunk shoot the other day. This image is very different from the one I posted last time: there is no anonymity imposed by dark goggles. Instead, an intriguing, complex expression. Ren is a complex person — creative, driven, certainly not shallow, and hungry to experience everything life has to offer. I think that comes through in this image.