I’ve recently liked developing Ilford HP5 Plus in Ilford Perceptol developer, for fine grain and nice tonality, but it is an expensive developer. I was very happy therefore to find an equivalent developer, Legacy Pro Mic-X that gives me the same kind of results, for a lot less money! Both these images (shot in Niagara-On-the-Lake using my Rolleiflex 3.5E3 camera) are all from the first roll of HP5 Plus I developed using this developer. I’m sold! 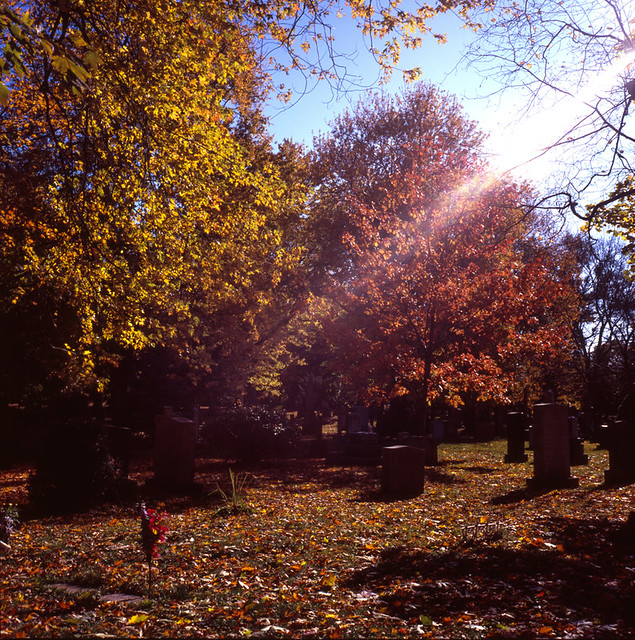 Today I tried Pyrocat HD film developer for the first time on a roll of HP5+ that I never got around to developing after shooting it this summer. “Pyro” based developers date from the early 1850’s, and it is always fun to try classic tools and techniques, and as for HP5+, from now on this will be my go-to developer for this film! 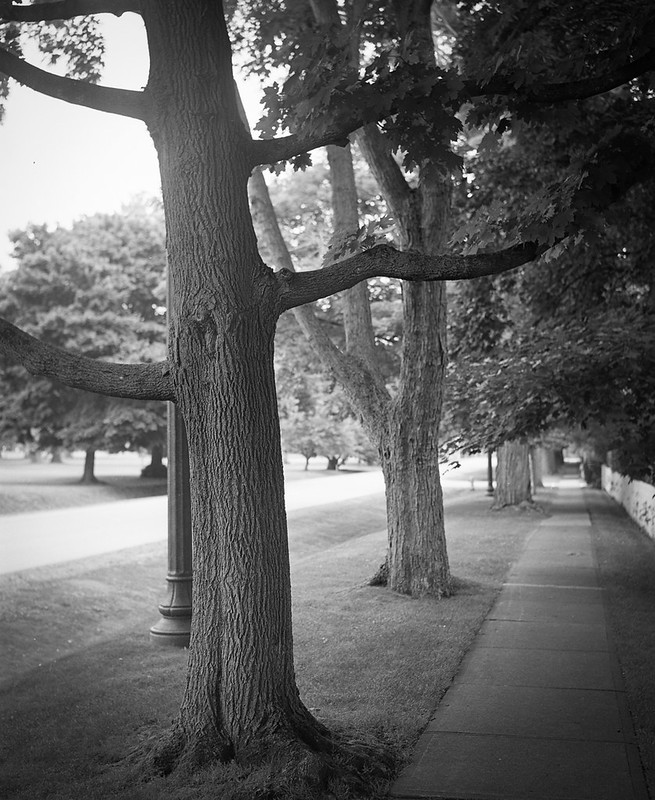 In the image today I used something old, but new to me; I developed the film using a rather old developer formula known as D-23 which I mixed up from scratch using chemicals bought on line. D-23 is a very simple (two ingredient) developer to mix up, and tends to soften contrast, which is useful for films like Rollei 80s which tends to be contrasty.

Today’s image is part of my ongoing “Portrait of the Artist” series.  Ashley has actually appeared in my blog before, but behind the camera, as the make-up/prosthetics artist in the Jennifer Gears Project, here and here. She is holding an airbrush of the kind that she very skilfully used for that shoot, and she is truly an artist in that regard.

While her vocation in a sense is “behind the scenes” she also has the instincts of a performer, and feels at home in front of the camera as well.

I was recently gifted with a vintage Minolta SRT 101 35mm SLR camera by my friend Nina. A beautiful camera, in very good working condition: while you can’t get the original batteries anymore because they contained mercury, I used a C.R.I.S. MR-9 adapter to allow the use of a silver 386 battery. For a test roll I used PolyPan F, exposed at E.I. 25, developed in Rodinal 1:50 for 11 minutes @ 20/68 degrees. I am still dialing in the film/developer combination  but the two images below hint a what can be done with this fine camera. Thanks again Nina!

It is easy to get spoiled with medium format film when it comes to fine grain: a larger negative means less magnification, and grain is less apparent, even with higher speed films. In 35mm however it is much more of an issue, and in my workflow which ends with a scanned negative, I was just not happy with my results. My friend Mike suggested TMax developer at 1:9, so I gave that a shot with an unlabelled roll of Tri-X I had kicking around. I was pleased with the grain and sharpness, but also pleasantly surprised to find pictures of my good friends Ken and Bryon; it was like opening a present on Christmas morning 🙂

Another post with a Polaroid bent today: When the very first Polaroid was introduced in the late 1940’s, the original prints had a sepia-like tone. This was considered a limitation at the time, and later Polaroid black and white films had a more neutral tone balance. Years later, they did introduce films that brought the tones back, but alas those films are long gone. I decided to try using traditional print toner to see what would happen. (Tech details for those so inclined at the ned of this post). The results while not perfect are intriguing, and worth experimenting with a bit more. The next test will be to leave this print out for a few days to see if I get any further tonal change or discolouration.

This image is from some street shooting I did in Ottawa last weekend. (If you look closely you can see me taking the picture; I’m the second bald head ;-)).

This was also the first roll I developed at home using C-41 colour negative chemistry; it was not hard at all — the only challenge was maintaining the higher temperatures required

Old cameras are many things, but often “idiot proof” is not one of them. Today’s image is from a roll of Delta 400 shot about a week ago. While unloading the film I noticed I had set the aperture incorrectly for the flash, and I overexposed the film by around two stops. I decided to underdevelop, or “pull” the film, so instead of developing for a full 15 minutes in HC-110 (Dilution H) I just did it for 12 minutes. The negatives are still overexposed (I probably should have tried 10 minutes or so). but what a great vintage look! When I scanned the negatives, a slight colour cast was left; more often than not I remove it (or replace it!) as it is not attractive, but this time it was perfect! I’m going to experiment with this workflow so more, that’s for sure! 🙂